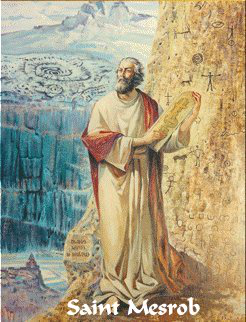 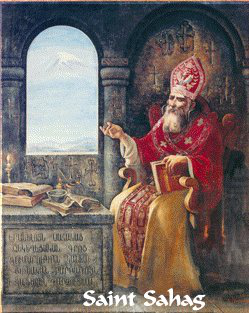 For almost 2,000 years the Armenian Church has grown in the light of the gospel message and has sheltered and nurtured her faithful in the warmth and truth of that light. This is her story. St. Mesrob was born in the village of Hatzegatz in the province of Daron. In his early years, he learned both Greek and Persian and served in the Armenian royal court. Later, he decided to enter the ranks of the clergy, and with some other young men he went to preach in the province of Koghtn around 395 A.D. During this period, he felt the great need of the Armenian people for an alphabet of their own, so he petitioned Catholicos Sahag Partev, and together they requested the aid of King Vramshabouh.

Mesrob traveled throughout Greater and Lesser Armenian and the Mediterranean world in quest for the lost scriptures. In Edessa, he found some of the scrolls in old Armenian, and after carefully reviewing them and exploring the possibilities, he began to create skeleton of the Armenian alphabet in 405. However, it did not meet the needs of the Armenian language. According to tradition, while meditating in a cave near the village of Palu, Mesrob had a vision, in which “the hand of God wrote the alphabet in letters of fire.” Upon his return to Catholicos Sahag and King Vramshapouh, the saint was received with great honors and much joy.

Immediately after the discovery of the alphabet, the Holy Translators completed the translation of the Bible in 425. The first words written in the Armenian language were from the Book of Proverbs: “To know wisdom and instruction; to perceive the words of understanding” (Proverbs 1:2). They also opened schools to teach the newly-created alphabet. Among those students were the famous translators Yeghisheh, Movses, Tavit, and Vartan.

The Armenian translation is the fifth known translation of the Bible. Earlier, the Bible was only translated into Syriac, Latin, Coptic and Abyssinian languages. Some specialists estimate this translation, performed by St. Mesrob and his disciples, as the best Bible translation ever. The French linguists of the 19th century termed it as the “Queen of translations”.

After the discovery of the alphabet, St. Mesrob spent many years translating and writing literary and ecclesiastical works. He went to many provinces where paganism still existed and preached the word of God in the people’s own language, with the light of the Holy Gospels. During this period, he was invited to Georgia and Caucasian Albania, where he likewise invented alphabets to suit the respective local languages. His life’s works have been recorded by one of his famous students, Goriun, in his book, The Life of Mashdotz. St. Mesrob was buried in Oshagan in the province of Vaspouragan, where a beautiful cathedral has been built in his honor, and where one may go and pay homage at the saint’s tomb.

The Book of Ritual used in the Armenian Church bears the name “Mashdotz” and is dedicated to this great saint. Although compiled at a later date, it is based on an earlier sacramental anthology attributed to Mashdotz. St. Mesrob gave the Armenian people the most precious of gifts, and continues to serve as an inspiration to all generations. Beloved by all, St. Mesrob is a special inspiration to Armenian writers and poets.