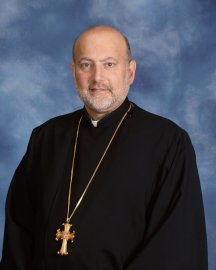 Fr. Shnork Souin, (Baptismal name- Gregory Haig), was born and raised in Toronto Ontario, Canada on January 16, 1961 and is the first Canadian born priest of the Armenian Church. He was baptized and raised in Holy Trinity Armenian Apostolic Church in Toronto Ontario. Following High School, he attended Ryerson Polytechnical University, in Toronto, where he received a Degree in Business Management. In 1987, he was married and moved to St. Catharines, Ontario where he worked as a sales representative for a large Canadian manufacturing company. Following his calling, he entered seminary in 1991 as a full time student of theological studies. He obtained a Master of Divinity at Concordia Theological Seminary and St. Nersess Armenian Seminary in the Fall of 1996, having prepared a translation of the Rite of Penance according to the Euchologion of the Armenian Apostolic Church toward completion of his Master of Divinity. Ordained a deacon in October of 1993, Fr. Shnork was ordained to the priesthood on March 4, 1994 by Abp. Hovnan Derderian, the primate of the Canadian Diocese now of California. He served as the parish pastor of St. Gregory Armenian Church in St. Catharine’s Ontario since October 1993. During this time he was also appointed the vicar of the Southern Ontario region taking care of the spiritual needs of the tri-parishes of the Niagara Region.. In addition to his pastoral duties, which included mission work in the Armenian communities of Alberta, Fr. Shnork served as a governor of the Canadian Council of Churches (CCC) and was elected as one of three Vice Presidents of the executive of the CCC in May of 2000, being nominated by the caucus of the Orthodox Churches.. During the summers of both 1995 and ’96, he led the Canadian Youth Mission to Armenia, a mission of the Canadian Diocese. The month long missions combined pastoral visits to remote regions of Armenia, focusing on work among those who lost loved ones during the war with Azerbaijan, construction and renovation projects as well as overseeing day camps for hundreds of orphans. Work among youth for youth and with youth has always been a priority for Fr. Shnork.. He was called and installed as the pastor at St. Mary Armenian Church in Livingston New Jersey in September 2001 by His Eminence, Abp. KHAJAG Barsamian, the Primate of the Eastern Diocese of the Armenian Church in America. Since his arrival, he has initiated new programs and ministries, as well as seeing to the upkeep and enhancement of the facilities and technology. He led over 30 members of his congregation on a trip to Armenia and has supported and encouraged many youth to travel to both the homeland and Jerusalem.. He has encouraged the engagement of young families, creating a fellowship opportunity and placing great emphasis on the participation of the faithful in the sacramental and liturgical life of the church. He has overseen and developed new educational programs that have been implemented in the parish including the incorporation of children’s sermons and family worship.. In May of 2011, after many years of hard work and planning, as well as winning the support and participation of the congregation, St. Mary received approval to finally expand and renovate their facilities whose Toufayan Hall and educational facilities will become the crown of the expansion.. Fr. Shnork served St. Mary for almost 10 years and enjoyed the support and faithful ministry of the faithful at the parish which he christened “The Little Church that Shares and Cares at Prayer.” . On a personal basis Fr. Souin has served on the Board of Directors for the Diocese’s Ararat Center, has served as the Associate Director of the St. Nersess Summer Conferences since the summer of 2003 and participated in many initiatives of the Diocese serving on numerous diocesan and regional committees. In addition to his ministry, Fr. Shnork has enjoyed ecumenical work, youth ministry and the opportunity for appearances on the Armenian Radio Hour of New Jersey. For relaxation and recreation, Fr. Shnork has played competitive ice hockey, sung in the Bass section of the Morris Conservatory Symphonic Chorus as well as the Chamber Choir. He is a very proud member of Leaf Nation as a lifelong fan of the Toronto Maple Leafs. He loves the water, ice skating and enjoys fishing for relaxation and recreation.. Fr. Souin was called to serve Sts. Sahag and Mesrob Armenian Church of Rhode Island in June of 2011 after 10 wonderful and fruitful years at St. Mary. He is overjoyed to be appointed as the new pastor of Sts. Sahag and Mesrob Armenian Church by the primate of the Diocese Abp. KHAJAG Barsamian. Together with his family, Yn. Julie and their adult children, Nick his daughter-in-law Susan, Conner and Elizabeth. On October 9, 2018, after many years of struggling with Heart Failure, he received the blessing and gift of a heart transplant and with a new lease on life and protected under the shadow of the All Holy Cross, is looking forward to the many opportunities and blessings to serve God in his ministry, serving the Armenian Christian community in Rhode Island to the building up of God’s Kingdom and the Armenian Church to the Glory of God.

My mission is to proclaim the Good News of Jesus Christ according to the holy apostolic teaching, practice and doctrine of the Armenian Church in order to equip the parishioners of Sts. Sahag and Mesrob Armenian Church with faith, hope and love, to live and to serve as members of His Church in a wholesome Armenian Christian Family.