The Renaissance of the Providence Armenian Community and the Purchase of a Church Building. 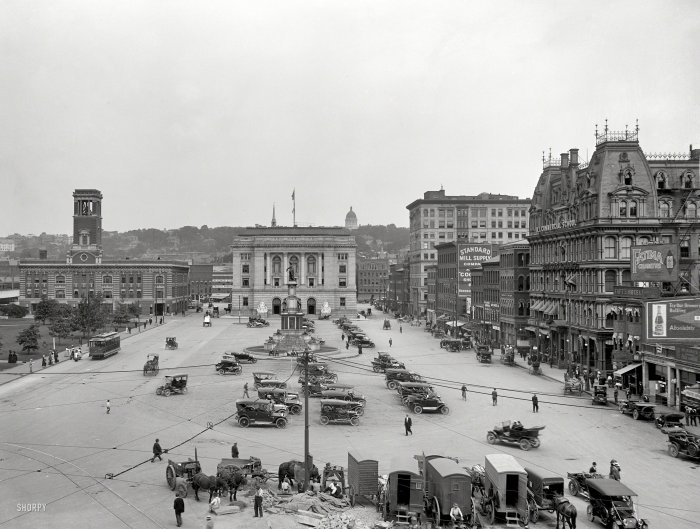 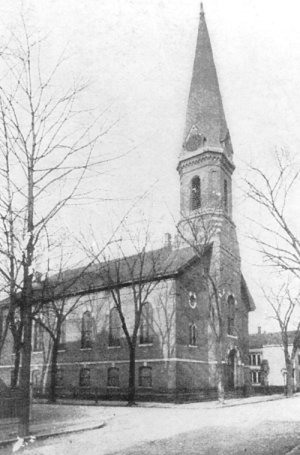 The year 1913 must be regarded as the renaissance of the Providence Armenian Community because thereafter started a new chapter in its history. The dream of having a church building of our own finally came true. Prior to 1913, services were held in a hall at 50 Exchange Place.

In the preceding years, several attempts to build a church had met with failure. According to the minutes of Council meeting of 1905, an attempt was made to purchase a Swedish Church at auction. Because they had but five hundred dollars, and fund raising was delayed, this opportunity was lost. A similar situation took place in 1906 with the same unfortunate result. In another instance, efforts were made to purchase land with the intention of constructing a church but this also met with failure. 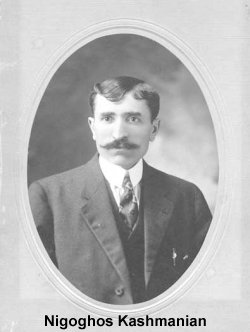 The date August 13,1913 will be remembered as one of the most important in the history of the Church. On that day the pastor of the Jefferson Baptist Church informed Mr. Avedis Deroyantz that the Jefferson Street Baptist Church was to be sold because they were uniting with another Baptist Church and this would be an excellent opportunity for the Armenians to purchase a church. Mr. Deroyantz conveyed this information to Messrs. Baba Kalunian, Zakar Danielian (Daniels), Hovhannes Abajian and Boghos Yaghjian, Chairman of the Parish Council. After consultation, the Parish Council elected the following committee to negotiate with the Baptist officials regarding the purchase of the Church: Avedis Goeljikian, Baba Kalunian, and Hovhannes Abajian. This committee eventually came to a final agreement with the Baptists. The purchase documents were signed by Zakar Danielian (Daniels), Baba Kalunian and Avedis Goeljikian. Hovhannes (John) Abajian, a Notary Public, had prepared and notarized these documents. The leading members ofthe community were then invited to a general meeting. Although unsuccessful attempts were made to disrupt this meeting, work proceeded as planned. Present at the meeting were more than two hundred persons, from whom a large committee was organized with the purpose of raising funds for the purchase of the church. The officers of this committee were the following: Setrag Sohigian, Chairman; Nigoghos Kashmanian, Secretary; Boghos Yaghjian, Treasurer; Harootiun Garabedian, Hagop Jorjorian, Garabed Sarafian, Alexan Manougian, Garabed Mooradian, Kevork Avedisian, Aslan Elmassian, and Avedis Talanian, Advisors. The Negotiating Committee announced the purchase of the Church for $9,100 and that Mr. Danielian (Daniels) had bound the agreement for sixty days by a personal payment of $100.

As a first step before final purchase it was essential that the Church be officially organized and chartered. Therefore, on behalf of the Church, the following members made an application to the Secretary of State of Rhode Island for a charter of incorporation under the name of Armenian Apostolic Church of Providence: Zakar Danielian (Daniels), Avedis Goeljikian, Sumpat Kalunian, Manoog Kazarian, and Baba Kalunian. The charter was granted and sealed by J.Fred Parker, Secretary of State, on September 26,1913.

The fund-raising committee collected $3,000 which was paid to the Baptist Church on December 22, 1913. 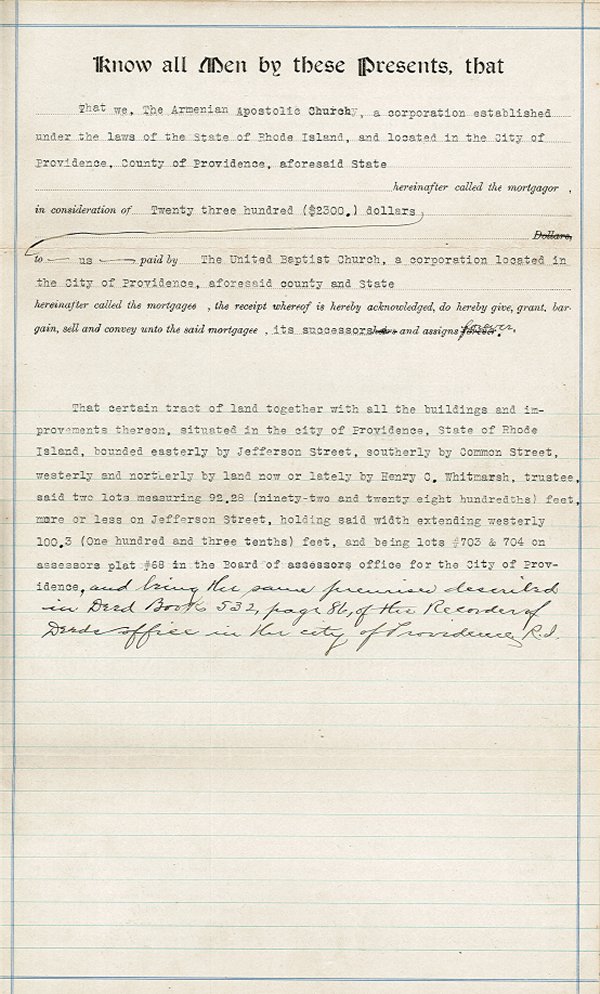 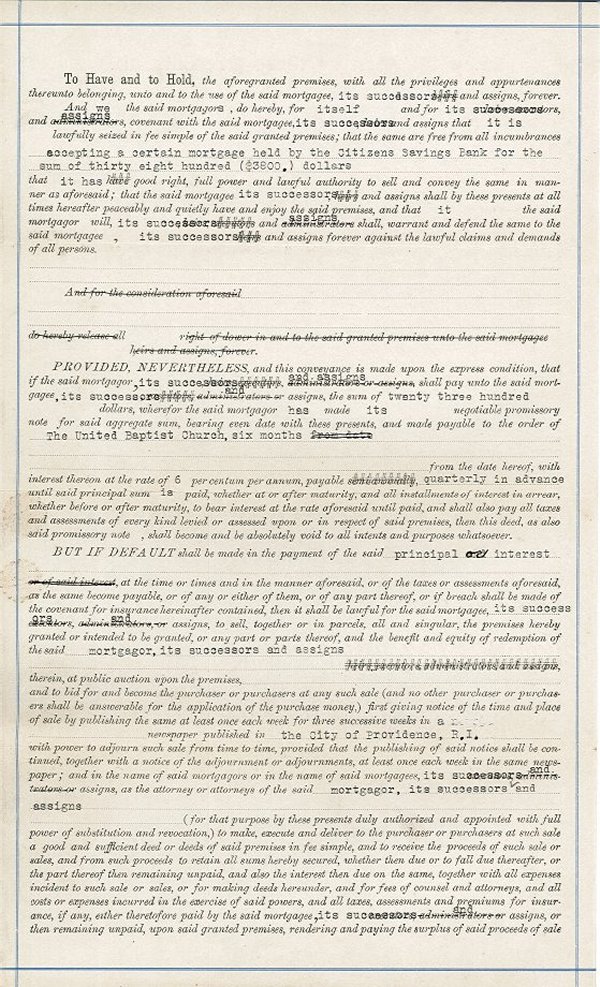 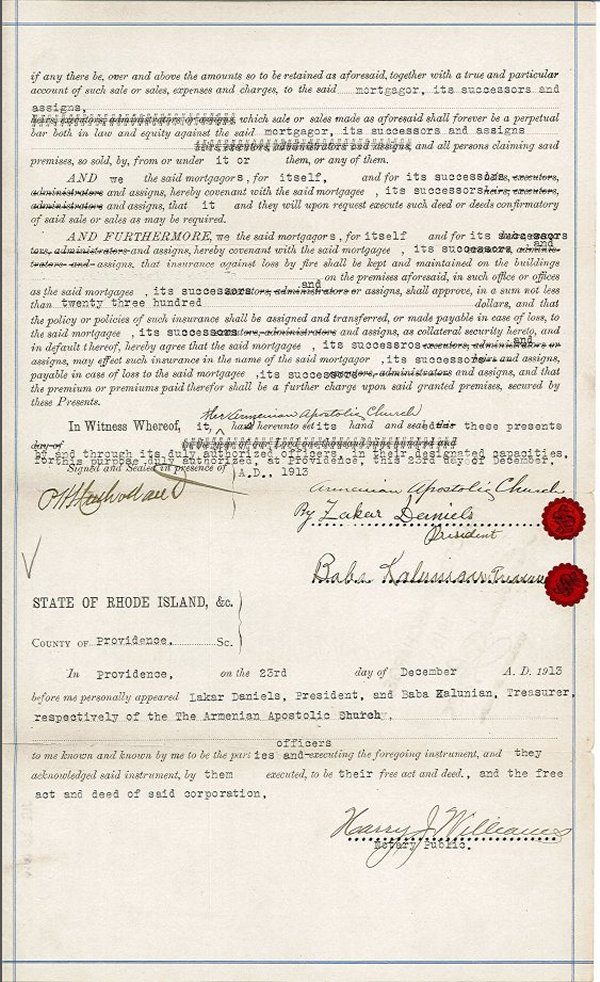 In the ensuing years the mortgage structure appears to have changed and in 1922, the balance due on the mortgage was $5,100. Because of serious financial difficulties it was found necessary to acquire an additional mortgage of $6,000, which brought the total mortgage debt to $11,100. This latter mortgage was signed by Haroutiune Garabedian, Sarkis Najarian, and Sarkis Messerlian.

Fortunately, in the following years through the untiring efforts of the Parish Councils, the Church was able to retire all mortgage debts and in 1936 the mortgage papers were burned at an enthusiastic celebration held in the Church Hall.